SCD - 044 is a NCE program in collaboration between SPARC and Bioprojet, a French biotech company. SCD - 044 is S1P receptor-1 (S1PR1) agonist which uses lymphocyte trafficking to treat auto-immune disorders

S1PR1 simulation increases affinity of various cell surface adhesion molecules for their ligands and the result is that the cells are retained / glued to the lymph node microenvironment. Agonist of S1PR1 would bind to S1PR1 expressed on various lymphoid cells and make the disease-causing lymphocytes cells to be retained in the lymph nodes. 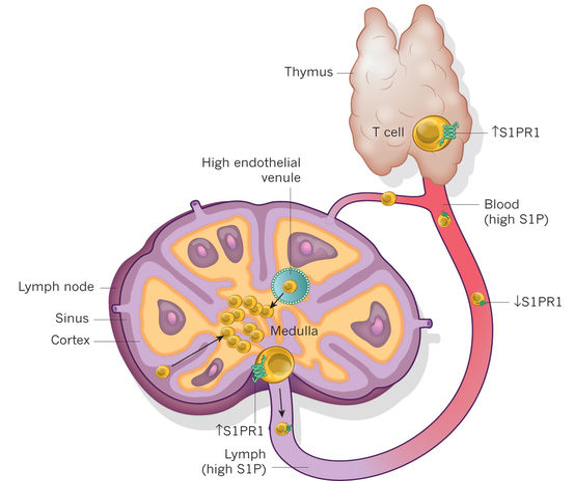 Fingolimod is an approved S1PR1 agonist indicated for use in the treatment of multiple sclerosis. However, in addition to its ability to cause lymphopenia and therapeutic efficacy in MS, Fingolimod also has appreciable cardiovascular toxicity that limits its chronic use as a therapeutic. This cardiotoxic effect of Fingolimod is believed to be mediated by S1PR3 which is highly expressed in cardiomyocytes. SCD - 044 is selective by 10,000 fold for S1PR1 over S1PR3. In the safety pharmacology assessment, unlike Fingolimod, SCD - 044 is devoid of cardiovascular side effects as expected based on its poor binding to S1PR3. SCD - 044 is orally bioavailable with acceptable pharmacokinetic properties in various species and is as effective as Fingolimod in causing lymphopenia in multiple species.

Pre-clinical studies were completed with promising results in animal models of autoimmune diseases, including psoriasis. Multi part phase 1 study is completed in healthy volunteers. Good balance was established between potentially efficacious doses and side effects. US FDA has accepted the IND for Phase 2 proof of concept study. Indications under consideration include Psoriasis, Inflammatory Bowel Diseases, Atopic Dermatitis & others. It is licensed to Sun Pharmaceutical Industries Limited for development and commercialization globally.